All Barramundi fillets produced have been caught in the Gulf of Carpentaria by accredited fishermen who have completed studies in all aspects of safe food handling and holds a certificate of accreditation as a seafood producer and works within HACCP regulations. The Gulf of Carpentaria fishery is accredited as a sustainable fishery under the Commonwealth Government Environment Protection and Biodiversity Conservation Act, emitting a very low carbon footprint.

Lenrex Fresh Frozen Barramundi fillets originate solely from the Gulf of Carpentaria. At its mouth, the Gulf is 590km wide and further south, 675km. The north-south length exceeds 700km. It covers a water area of about 300,000km2. And the perfect grounds in terms of salinity and food source to produce the highest grade of quality Barramundi.

Barramundi are found in a wide variety of habitats in river creeks and mangrove estuaries in clear and turbid water, and are commonly found in river systems with large catchments with water temperatures above 20 degrees. Within Australia their range extends from the Mary and Maroochy River systems in South-East Qld around the entire northern coast to Shark Bay in WA. Barramundi are protoandrous hermaphrodites, meaning they start their lives as males, reaching maturity at around 3-4yrs and later change gender and become females, usually at around 5. They can grow up to 1.8mtrs.

The commercial side is managed through low intensity and minimum impact fishing and seasonal and area closures. Gulf net closures fall between 7th Oct and 1st Feb. Barramundi has gained a reputation as one of Australia’s finest eating fish. High salinity water in the Gulf attributes to its top quality taste and colour and wild caught Barramundi is much sort after as a premium fish.

Fresh frozen at sea, there is a high level of care taken to preserve the freshness of the fillet. Only out of the water for a matter of hours, the fish that these professional fishermen provide are of the highest quality. Running nets as often as 1-2hrs, the fish are immediately Iki Jime and bleed and into brine tanks to lock in the freshness at between 0 and 5 degrees. Then the fish are processed and snap freezers so as the fillet’s beautiful white flesh is untainted. Packed in a 10kg net weight fish cartons with liners, fillets are individually bagged so as to preserve in minus 30-35 degree temperatures. Fillet counts per carton are displayed on the box and graded so that no fish that could produce in and around a 2.5kg fillet is kept. These fish are released.

Conducive to Safe Food requirements and guidelines, and in accordance to packaging specifications as mentioned above, product has a “best before” of 18mths prior to packing date. 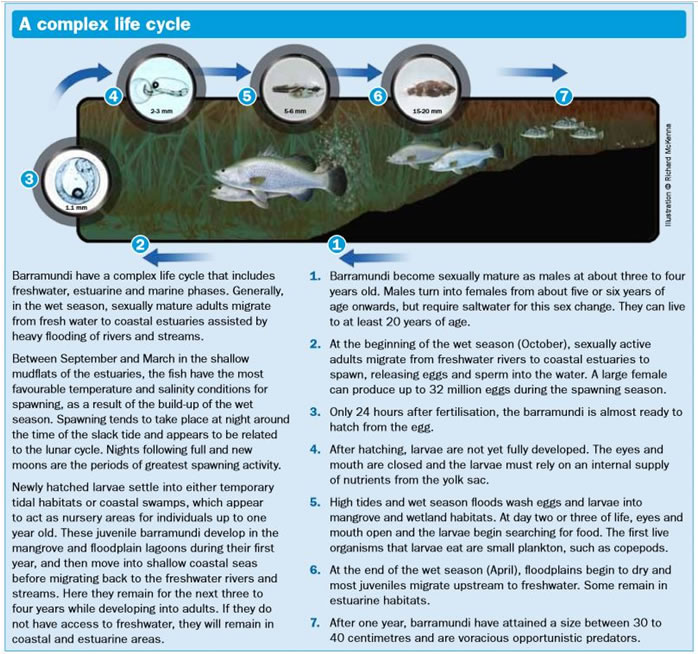